I have promised myself I won’t write about what’s currently happening in Gaza. Too many emotions, too many friends I love and respect, too afraid to say something that could be missunderstood. Those of you who know me, know how I feel towards the occupation. I don’t think I should state it or post it on my FB wall. I will however post several links I’ve found most interesting. Please feel free to add more.
Sami Nair’s take (in Spanish): he is so good, it may deserve a translation
Other (journalist, therefore much more reliable than me) friends’ takes:
Ismael Monzón
Francesca Cicardi
Ricard Gonzalez
Conflict in Gaza tests alliances
Morsi’s little room for maneuver
Running an errand during a ceasefire can be dangerous
Jebari’s killing from a brave neutral point of view
The conflict’ effect on Morsi’s clout regarding Israel
Hamas in jeopardy?
Where do the missiles come from? + another take (in Spanish)
On the Iron Dome System (in Spanish)
Hamas is winning the rocket war
What about Arab countries’ reaction?
Analyzing Netanyahu’s unjustifiable stance
Was there a chance for a peaceful agreement?
The Arabist assesses Jebari’s killing
Isn’t the peace process dead?
Innocents prepare for the worst
What Israel isn’t realizing and what it should do
Hamas kills men accused of collaborating with Israel. That’s the way one defends its citizens and calls for fairness… Who said this is not a terrorist group again?
Has Israel been targeting journalists?
Covering the war
An “Islamic winter”, courtesy of Hamas
Hamas is gaining more and more support amongst West Bankers, clearly overshadowing Fatah.
From the inside
This war isn’t in Hamas’ interest (in French): not 100% convinced myself, but it has interesting points
Delving into Hamas’ motivation
BHL is criticized (again – in French)
The difference between a Palestinian cause and a Palestinian pretext (in French): this is going to hurt!
A forescast war (in Spanish)

I’m not 100% sure about all the facts, but it’s an article worth reading: 10 things you did not know about Gaza
That is a must-read article: insightful background of the situation

Hope for a peaceful Israel dwindles: are Israelis resigned to repeating the same action their people had to stand decades ago? I’m not so sure about that…

Trapped in Gaza: “I don’t know how the story ends” (a story is even worse than a picture)

Questions I still haven’t figured out a plausible answer to (please feel free to answer):
–> How can a country that calls itself “civilized” kill a whole three-generations family mainly targeting a top Hamas figure, but after that realizing its identity of the latter was mistaken?
–> Is Egypt really interested in promptly brokering a ceasefire? Or is it not more convenient for them to let the struggle linger on a little bit, meanwhile softly whispering to both sides, thus gaining credit both inside and outside and strengthening its international position?
–> How does Khaled Meshal have th nerve to comfortably remain in Cairo and, instead of calling for peace, say he is proud of those who are ready to die (or have already died) for “the cause”? Mr Coward, either go to the Strip and fight alongside them, either find a way to stop the bloodshed! (that also goes to all the spoiled kids across the Arab world who say they support the resistance posting pictures on their FB from their sofas but would never dare approaching an actual battlefield)
–> Israel claims its inhabitants suffer from psychological disorders linked to the threat posed by the launching of rockets. Very well, but what about the distress caused not only by the decades-long occupation in itself, but particularly by simply parking hundreds of tanks and regiments across the border, ready to attack an incredibly narrow strip of land with no escape (Egypt hasn’t still fully opened the border), thus trapping an entire population and later exposing thm to continuos bombing from both planes and warships?
–> How many rockets were launched before Jebari’s assassination? How many afterwards? Was his life really worth dozens of innocent Palestinian lives, taking into account Israel’s reaction was completely predictable?
–> Why (specially after the 2008 war) shelters for random Gazans (as Hamas’ top leaders do have their own bunkers) have not been built? 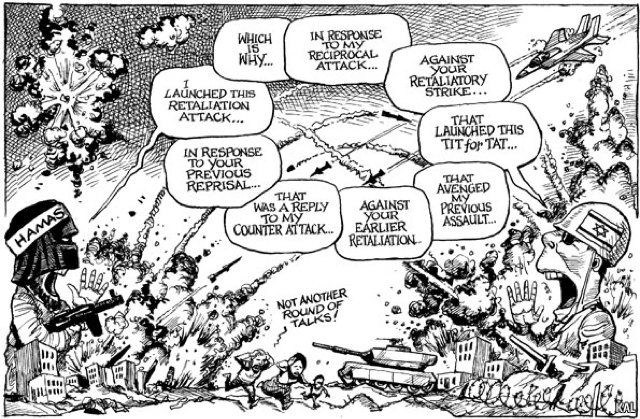