According to UN numbers, more than 60,000 people had already lost their life when a tired but impassive at the plight his compatriots are going through Bashar Al-Assad delivered, for the first time since June, a speech (that was announced as the “discourse of the solution”) that hasn’t convinced anyone (barring the dozens of staunch supporters gathered at the Upper House that cheered and acclaimed the President like a hero), neither internally nor abroad, where the address to the nation has been dismissed as a complete disconnection from reality. One more time, Assad put the blame on terrorist elements backed by external forces (calling them “puppets of the West”) he refuses to negotiate with. Even though it is beyond doubt a certain amount of foreign intervention is being felt on the ground, we all know this accusation, this blatant justification is non-sense. He nevertheless acknowledged the need for a dialogue “the regime has been looking forward since day 1”, and notably offered negotiations for the drafting of a new Constitution, but did not precise who the interlocutors should be. The speech ended up looking like another desperate attempt to cling to power and justify the unjustifiable.

Indeed, Mr Assad has affirmed many times he intends to remain in power “until the end”, in spite of both the opposition’s and other countries’ calls for his stepping down, prioritising it as a non negotiable precondition. UN-LAS Special Envoy Brahimi has even dared to criticise the opposition’s stiffness, saying they do have the right to demand the president’s departure sooner rather than later, but adding that the question remains “how?”, as “they have been discussing it for over two years!”. Both sides hold incredibly unmovable positions: is there really a way out of this bloody stalemate? As I hinted in my last post on Syria, the “Geneva Solution”, providing for a transitional government but not referring to the tyrant´s departure, seems to be the only viable option (besides a further escalation of an increasingly harsh conflict). The Algerian diplomat, who has warned of a “Somalization and hell” in Syria if a political solution is not reached soon, totally adheres to the Geneva option and has as of lately entered into a “diplomatic ballet” with high profile dancers such as Moscow, Washington, Riyadh, Cairo and even Iran (who are again all due in Geneva before the end of next month) . His initial goal was to convince Assad of at least putting into place a transitional government and restructuring both the army and the security apparatus, concessions the President has shown no willingness of making.

The fighting has intensified and Assad’s troops have been driven out of large areas of the north and east. The army is now trying to remain in power of a swathe of land going from the south through Damascus and its suburbs, to what has been called an “Alawite country” on the west coast, surrounding Latakia, the hometown of Mr Assad. The regime, however, still seems to have the ability to control Damascus for months before even considering the option of moving into this Alawite region. Indeed, in his last interview with a Russian TV in November, Assad rejected any idea of ​​going into exile. Moreover, it is precisely in the Alawite mountains where weapons of any kind, and particularly the chemical weapons everyone is nowadays worried about, are believed to be stored. Some believe Assad and his allies are aware of the regime’s strengths and have thus resorted to more violence instead of even considering the dialogue option. Others consider they have lost all sense of reality. Peter Harling, of the International Crisis Group, thinks “the President defends himself – and by extension defends Syria – conscious of his being locked. By virtue of this vision, aggression is the only option”.

Mr Assad also knows he remains in power because many Syrians (mainly Government officials, businessmen and nearly all Allawites) still support his stance (or at least don’t overtly back the uprising) and indirectly contribute to the stalemate. According to the NYT, “many people express a wish for a political solution — perhaps a transitional government involving moderate government officials — but believe that decisions are being made by armed men on both sides who refuse to compromise”. And they are not wrong: both sides now seem to rely merely on force, and it’s the armed folks who call the shots. The outcome of the conflict depends on two factors: whether the international community decides to intervene to some extent, and how the infighting on the ground will evolve, even though voices both within the opposition and the regime have been heard admitting neither side is nowadays able to win. 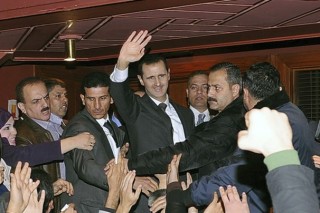