Anyone out there unaware of Assad’s latest mischief? Really? Well, on the occasion of Syria’s  Independence Day, the country’s stiff President gave an interview to the Syrian official television channel Al-Ikhbariya. The interview coincided with the country’s Independence Day, and at one point of the ranting he linked his departure to a “decision of the people”. Was he maybe suggesting there might be a presidential election, in which he will beyond doubt be the front runner, in 2014? He then paradoxically added that his post is of no value without the support of the people. Which people exactly?
Assad’s speech was full with pearls of wisdom, notably the one about the West being trying to colonize his country and thus playing with fire as a result of its funding Al-Qaeda operations. He somewhat threatened the West saying it will pay dearly one day or the other, for this organization would turn against them in the future, striking “in the heart of Europe and the United States”. He illustrated his warning by mentioning previous examples in which, according to his opinion, Western countries have suffered the negative consequences of having financed the terrorist organization, such as Afghanistan. And even though this may sound crazy coming from his mouth, according to various pundits he has a point, moreover if we take into account that Al-Nosra, composed of Syrian and foreign jihadists, announced a week ago its allegiance to Al-Qaeda leader Ayman al-Zawahiri, who four days earlier had called on the rebels to fight for the establishment of a “jihadist Islamic state”.

This was not Assad’s only threat. Criticizing the support Western and Arab countries are providing the rebels, he also hinted that the war in his country could well spill over neighboring Jordan, whom he accuses of both training rebel fighters and facilitating their entry into Syria. In the respect, the US has increased its military presence in Jordan to train the Jordanian army and intervene if necessary, notably to secure stockpiles of chemical weapons Syria is rumoured to possess. According to some, he crossed one of many red lines when he stated that Jordan had to learn the lessons the Iraqi authorities had already learned.
The Syrian president also added his regime does not have any other option apart from victory, for their not being victorious would mean the end of Syria. Assad admitted there is not mere security problems as before, but a war in every sense of the word, in which they cannot surrender, they cannot give in. He then drew a parallel between the Syrian “heroes of independence” and today’s Syrian army: “the commemoration of the removal of the last French soldier is a bright page in the history of Syria, and nowadays it’s the heroes of our brave army who lead the fight against terrorism”. Throughout the whole interview, the President did not mention, not once, the terms Sunni or Muslim, neither he named any religious sects. He keeps talking about terrorists and mercenaries. He even dared to affirm that sectarianism is less pronounced in Syria now than at the beginning of this conflict.

The thing is that Assad will be able to hold on provided that the four pillars on which the regime rests remain in place: the army, the religious minorities he claims to be protecting, the business community and external support, mainly from Iraq, Iran and Russia (I feel tempted to include China in this list, but only because of its vote within the UN Security Council). At the same time, the main word that comes to my mind when I think about the opposition, both inside and outside Syria, is disorganization. There’s not a united Free Syrian Army, and the ones who inflict the biggest losses to the Syrian army are unfortunately the jihadists. The territories that have been freed are in a helter-skelter state. Take for instance the Kurdish controlled territory, where the risk of infighting between the rebels and the kurds is not negligible.

The Syrian uprising has been evolving throughout the two years that have gone through since the peaceful demonstrations inspired by its Arab brethren kicked off in the south of the country. A peaceful revolution evolved into a civil war that in its turn has escalated and become a proxy war in which regional and international powers are both involved. Let’s not fool ourselves: the Syrians are no longer the masters of their destiny. For the first time in decades (barring the Israeli-Palestinian issue), the conflict is not confined to national borders. Lebanon has felt its effects. There’s no doubt about Iraq. Jordan has, too. As have Turkey, Israel and even Egypt. We are somewhat back to some kind of Cold War, and the actors drawn in it are not that different. Indeed, the main feature of proxy wars is that local interests do not coincide with foreign ones. We are indeed in the face of a war who puts into question a whole system born with the 1916 Sykes-Picot Agreements.

The war in Syria indeed comprises at least five separate battles, all taking place at the same time. It represents a domino piece in the “Arab Spring” game: it all started with a rebellion against a dictator. It’s a war between regional powers. It’s a war between global powers. It is a proxy war between regional and international allies, who take advantage of the conflict to thrust their own interests (see Qatar, Iran, Turkey and Israel among others), an image of what some call the Arab confrontation between moderates/conservative powers (US supporters) and extremists (anti-Western actors). It’s a war between Iran (and its puppet cum-militia, Hezbollah) and the rest of the world. It’s a war between confessions, the latest and deepest clash between Sunnis and Shias in centuries. It’s a war between centralization and authoritarianism on one hand, and individualism on the other hand. It’s a war between a strong state clinging to power, and identities looking forward to affirming their features and rights. It’s a war between communities. It’s a war between tribes. In relation to that, it’s a war between states and nations-to-be (ie Kurdistan). Let’s not forget it’s also a war between Islamists and secularists or, as some like to put it, a war between jihadists and more secular groups that will erupt again and with renewed strength once Assad is ousted. All in all, I believe it’s a war between optimists, idealists and realists, as well.
It’s also a war facing a serious (and bloody) threefold impasse. From a military point of view, the situation is subject to change every day. As of today, the rebels control much of the east and the surroundings of the large cities. The regime still controls the capital, most of the towns and major roads. From a political point of view, It’s nowadays incredibly difficult to believe talks are going to start anytime soon. Last but not least, from a diplomatic point of view, Brahimi doesn’t seem to find his way. He has a sensible plan, but nearly no country has jumped on the bandwagon. The main problem is that Syria is in danger of becoming a failed state marked by the breakdown of any kind of government, economic collapse, the disappearance of the production weave, the destruction of all infrastructures and, above all, a significant social divide that looks set to hinder reconciliation and stability for years.. 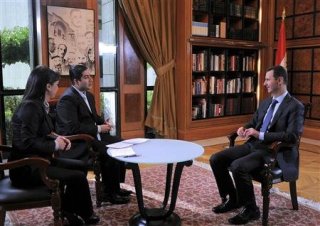