Tamarrud (rebel yourself in Arabic), Egypt’s most famous protest movement, the one that sparked the 30 June huge demonstrations that ultimately ousted Mohammed Morsi, has inspired several copycats in brethren countries. Which ones? The ones who already went through their (successful or not) “Arab Springs”.
The most glaring example is Tunisia, where the ouster of Morsi coincided with the start of public sessions to discuss the new draft constitution and where the struggle between bad (above all, slow) governance and legitimacy is also at stake. A petition clearly inspired by the events in Egypt calling for the dissolution of the National Constituent Assembly the movement accuses of having lost its legitimacy and the enacting of major government reforms, the scrapping of the “hijacked constitution” and the consequent preservation with slight amendments of the 1959 constitution, and preparations for early presidential elections soon started circulating online (notably through their Facebook page and the Free Tunisia Facebook page), gathering more than 200,000 signatures in approximately two weeks. The group expects to gain at least two million signatures. The movement has succeeded in attracting media attention and in building a strong presence online, even though it is struggling to build popular support, for their foundation is a pretty disconnected network of young citizens, who post messages and political cartoons, some of them with violent overtones, expressing discontent with the ruling Islamist Ennadha party and its leader Rached Ghannouchi, who was swift to take the stage last Saturday and call on the Egyptian people to stay in the streets until Morsi returns to power. Other politicians, even those which share the same objectives as the Popular Front and Nidaa Tunis, have also received the move rather coldly. The movement’s organisers have even come under verbal and physical attacks in various places, probably at the hands of the extremist so-called “Leagues for the Protection of the Revolution”.
It was clear the Egyptian events were going to have some kind of effect on neighbouring Palestine as well. Particularly in Gaza, where its residents saw a key lifeline cut with the closure of the Rafah crossing and their leaders´ influence in jeopardy because of their close links with the Muslim Brotherhood. Palestinian politicians have tried not to comment on the situation, barring an initial reaction by Gaza’s Prime Minister Ismail Haniyeh avowing the changes in Egypt will not impact the Palestinian cause, a cause that represents an essential cause for the Arab, Islamic nation. They will certainly do, however, as the strip clearly feels increasingly sidelined by its former allies – Hezbollah, Syria and Iran, Tunisia, Turkey and Egypt itself.
A Tamarrud page, that has already more than 19,000 likes, has also been created in the occupied territories. The site dawned on 1 July and calls for an end to division and corruption, two of the most serious issues Palestine faces nowadays (besides the presence of Israel, of course). Their slogan is actually similar to the one that was chanted over and over again during the (first?) Egyptian Revolution — freedom, dignity and social justice — their page affirming: “Oh Palestinians, revolt against oppression and division, revolt against those impeding the elections. No one is legitimate; the mandate of everyone has ended. The only legitimacy is that of the people. Our movement in the West Bank and Gaza is peaceful with a clear aim — returning legitimacy to the people”. In its first statement, the movement stated “we are an independent initiative that is not related to any party, movement, faction or authority. We are a youth initiative that aims at making the voice of the youth heard and enabling its political participation”. It seems the movement is capable of gathering more support on the ground than its brethren, as masked demonstrators claiming to be part of it marched a week ago in Ramallah calling for a third Intifada, chanting “military action is the shortest route to end occupation”.
A Tamarrud Syria Facebook page (later followed by an official site) has also been created, in this case with the aim to protest what has been described as the official opposition (the Syrian National Coalition)’s failure to represent and achieve the goals of the Syrian people who took to the streets more than two years ago and have been fighting for their freedom ever since. Rebellion is always hazardous in Syria, however, and within hours of its creation, a post informed followers that the house of one of its administrators, who has now disappeared, had been raided by the regime’s security forces. The collection of signatures has been also set up, but confronts innumerable dangers.
A Tamarrud copycat movement has also been created in Bahrain, a country where calm has not really taken hold and protests are still taking place every now and then. In this sense, a Facebook page dedicated to the Bahrain Tamarrud movement calls for people to take action on August 14, the day the country celebrates its independence from British occupation (and coincidentally, the two and half a year anniversary of 14 February, the day the protesters consider their starting point). The statement mobilizing all. kind of Bahraini citizens unsatisfied with their government justifies the reasons behind this movement stating that people want “a nation that embraces all its citizens. We want a Bahrain to which we can all belong — a completely independent Arab nation — for a free sovereign people who are the source of all powers. This movement is for freedom, for which Bahrainis have long yearned and made great sacrifices over many decades of struggle”.
A Facebook Moroccan version of the Egyptian Tamarrud movement was also created, in this case with the aim of ousting the Islamist-led Bekirane Government, accused of not making enough reforms of importance since it came to power after the outbreak of the Moroccan Spring. For this purpose, the movement has invited Moroccans to protest on 17 August.
A Tamarrud page has even been created in Libya, where the aim is achieving unity and an end to factionalisation that is putting stability under threat. 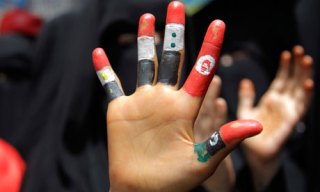